Farming has played a role in shaping the cultural landscape we see today. Hayfields, grazing grounds and summer mountain farming areas are important parts of the landscape. In order to maintain the open cultural landscape, active agriculture where the grass is cut and animals graze the land is absolutely crucial.

Unfertilized hayfields, where the grass is harvested to make hay, are home to a wide range of herbs and insects. These hayfields are endangered habitats and it is important that they are looked after. Many of these valuable hayfields can be found in the Nærøyfjord area, at Stokko, in Undredal, Dyrdal and at Nedbergo. The endangered species of butterfly called the narrow-bordered five-spot burnet can be found at Stokko, Nedbergo, Stigen and along Bakkastrondi. It is dependent on flower meadows and open areas in order to survive. Grazing livestock on uncultivated land and in the mountains has had, and continues to have, a great impact on the landscape. The grazing animals eat grass, leaves and small trees, and keep the landscape open. 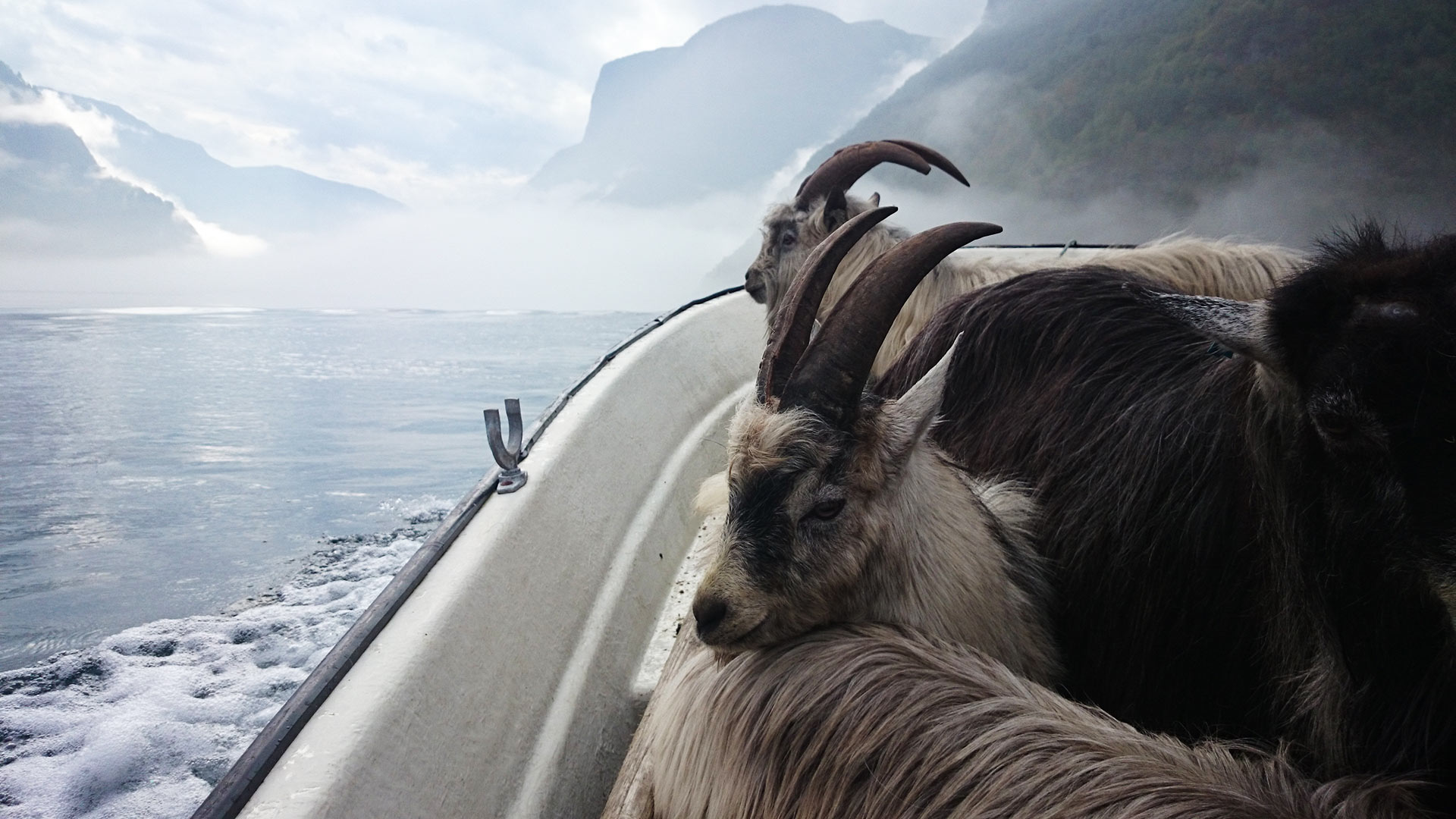 Summer farms and mountain farming were an important part of agricultural operations on the farms in the fjord villages. There are rich grazing areas in the mountains, and a lack of hayfields down by the fjord or at the mountain farms. Summer farming was therefore essential if one had livestock on the farms by the fjord. The traditional summer farmhouses were small, including a living room and a room to produce cheese and butter. Many of these summer farmhouses have been restored and their constructions have been safeguarded. These mountain hamlets provide visitors to these areas with an extra special experience. 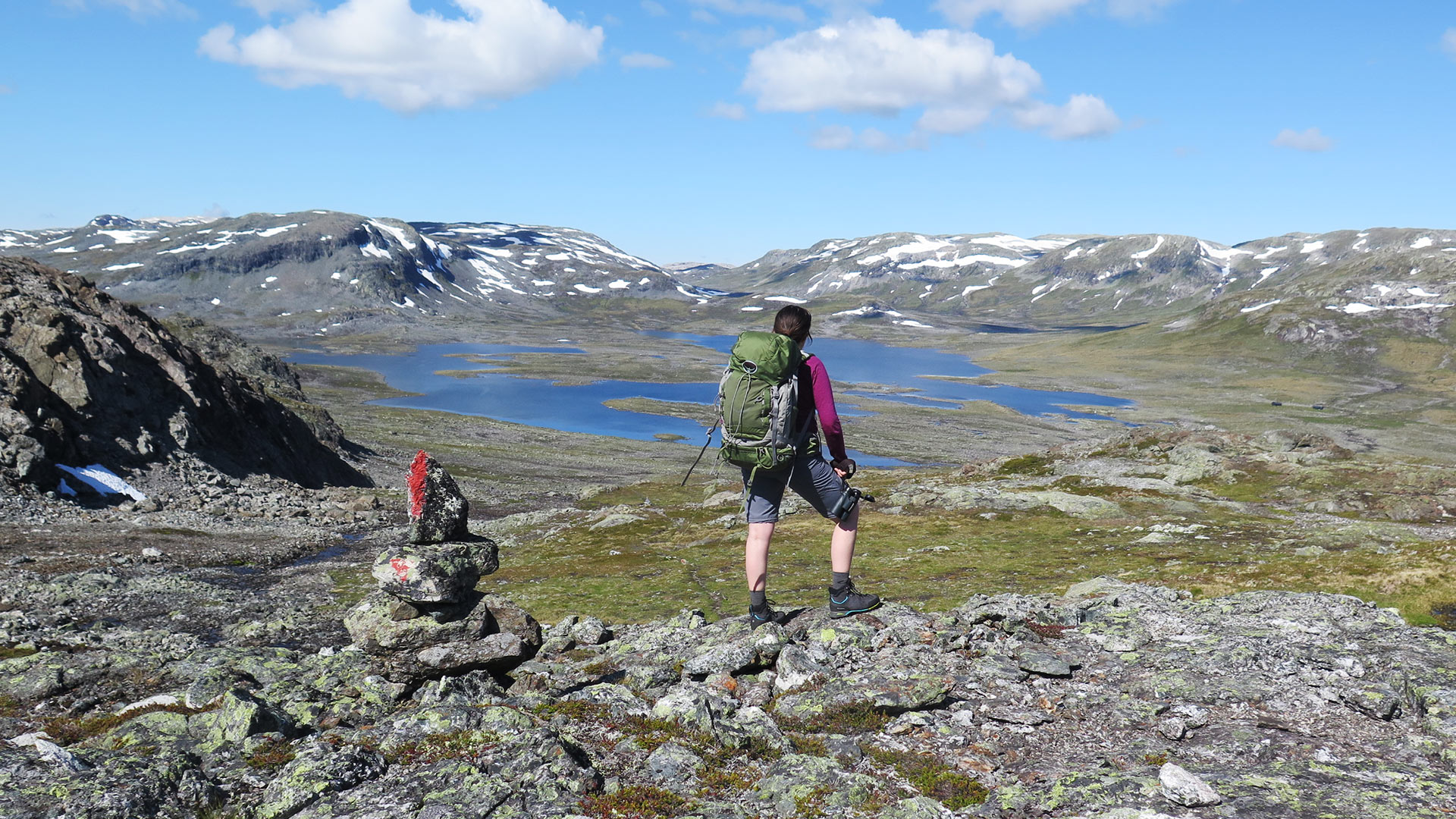 In times when it was common to run summer farms, it was also important to have good and safe roads in order to access the farms – for both people and animals. A lot of the ancient cattle roads are well-constructed roads that wind up the mountainsides, many of them with beautiful stone walls.

Rimstigen is an example of a cattle road that runs from Tufto and Bakka to the summer farms in Breidalen valley and Røyrdotten. The cattle roads are cultural monuments that must be looked after, and many of the them are currently used as great hiking trails. The cattle road from the farms at Brekke in Flåm lead to the summer farms in Ljosdalen valley. The first section of this trail has now been adapted with stone steps so that it can be used by the many tourists who visit Flåm. The trail is further T-waymarked to the tourist cabin at Grindafletane.

Roads and traffic routes are key cultural monuments in the Nærøyfjord area. One of the oldest roads is the trail from Fronnes, running up Frondalen valley and over the mountains to Raundalen valley. According to folklore, the road was used by King Sverre. Other important traffic routes are Stalheimskleiva and the Postal Road.

Stalheimskleiva used to be an important traffic route westwards. In fact, there have been three different roads leading up the mountainside. The first road up the mountain was built in the 1600s, and the other around 1700. Sections of the old routes are still visible in the terrain where they cross the current road in many places. The road we currently know as Stalheimskleiva was developed into a cart road in the 1840s. This enabled the transport of foreign tourists by horse and cart from Gudvangen up to the Stalheim hotel. Stalheimskleiva continues to be one of the best-known tourist attractions in the area.

The postal road between Bleiklindi and Styvi was built around 1660, and was in use for approximately 100 years. It is part of the Royal Postal Road between Bergen and Oslo. Styvi had its own post office, and the farmers there were called postal farmers. The post was transported over land from Bergen via Voss to Gudvangen and Bakka. From there, it was rowed across the fjord to Bleiklindi and carried to Styvi. When the ice on the fjord was deemed unsafe, they used a purpose-built boat with runners on it. They could drag it across the frozen fjord and it would float if they fell through the ice. All they had to do was jump on board. They then rowed the post from Styvi to Lærdal. Today, the postal road is a great hiking route. Large sections of the road have beautiful stone walls, and it is maintained and cleared by the landowners on behalf of the Protected Area Board. 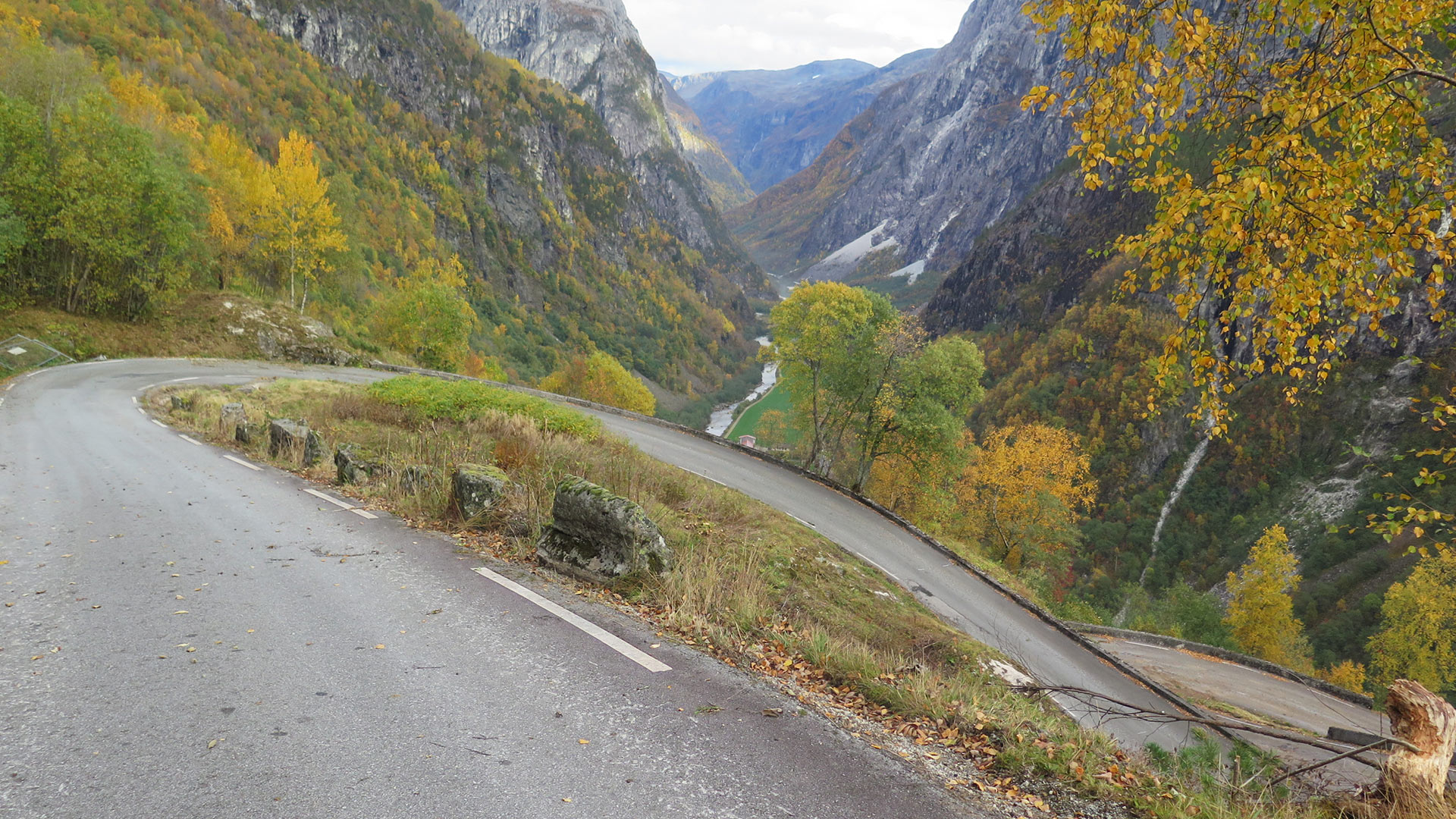 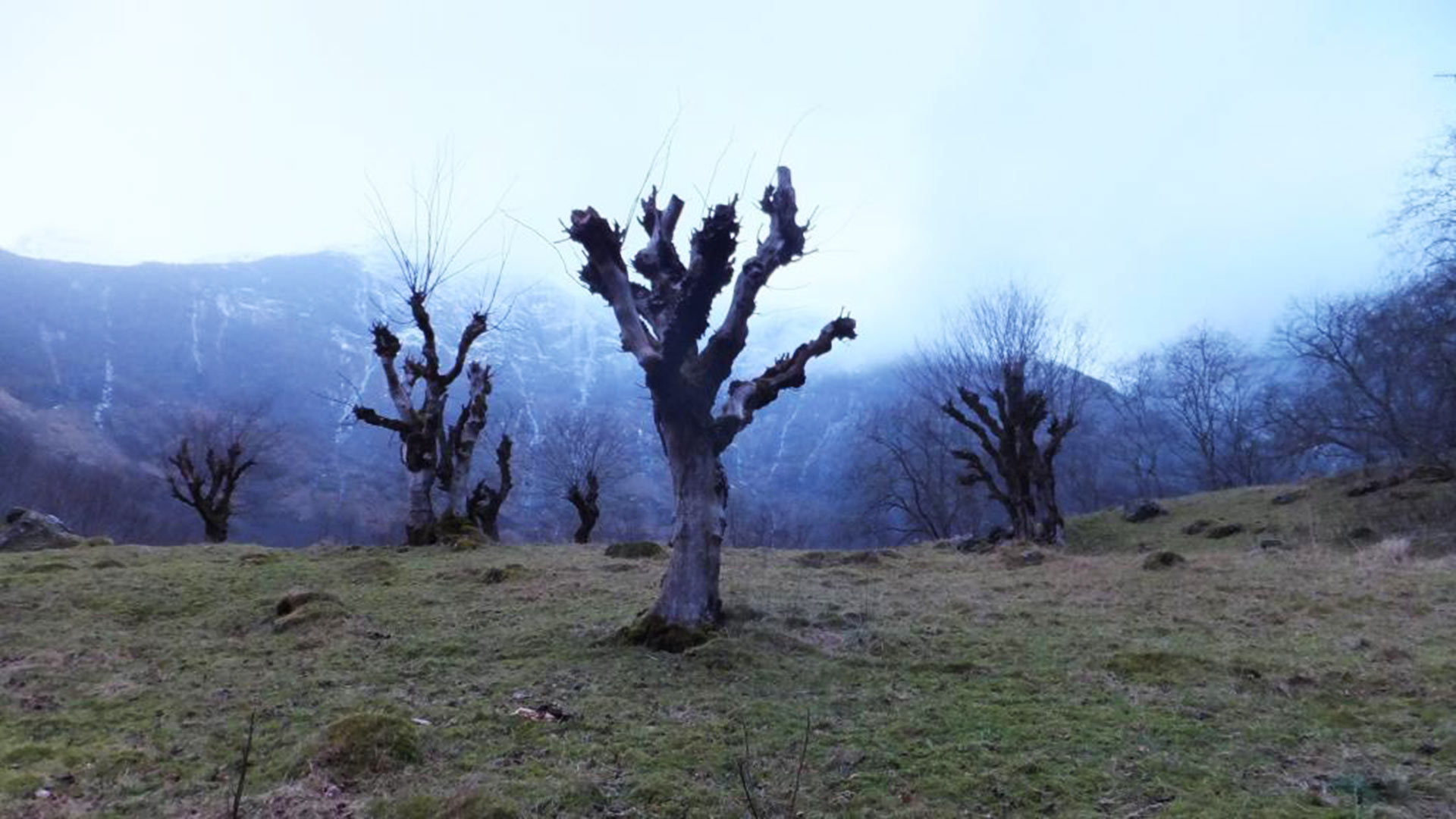 Pollarding shows how trees were utilized for fodder in the past. Pollarded trees are very characteristic and are a distinct part of the cultural landscape. It is important to look after these trees, both as cultural history and as an experience. Even today, leaves are occasionally used as animal fodder. In the past, leaves were considered important dietary supplements for the animals. It was said that leaves were ‘pure medicine’. Perhaps they were an appetizer in what was normally a rather drab diet?

Old burial mounds that are found in many places in the area are evidence of ancient settlements, all the way back to the Bronze Age, which started around 1800 BC. Burial mounds are automatically protected cultural monuments of national value.

One of the largest burial mounds in the area can be found at Holmo, three kilometers from Styvi Farm next to Nærøyfjorden. The mound is situated at the highest point in the terrain, so that everyone who entered the fjord would see it. The burial mound, which looks like a large moss-covered pile of rocks, is two meters tall and 15 meters in diameter. There is a large hollow on the top that is evidence of digging. The age of the burial mound is not known, but its size and shape suggest that it may be from the Late Bronze Age, around 1800 BC.

There are several burial mounds at Fronnes that are most likely from the Bronze Age. One theory is that Fronnes was used as a burial ground by Otternes Farm, located on the other side of the fjord. 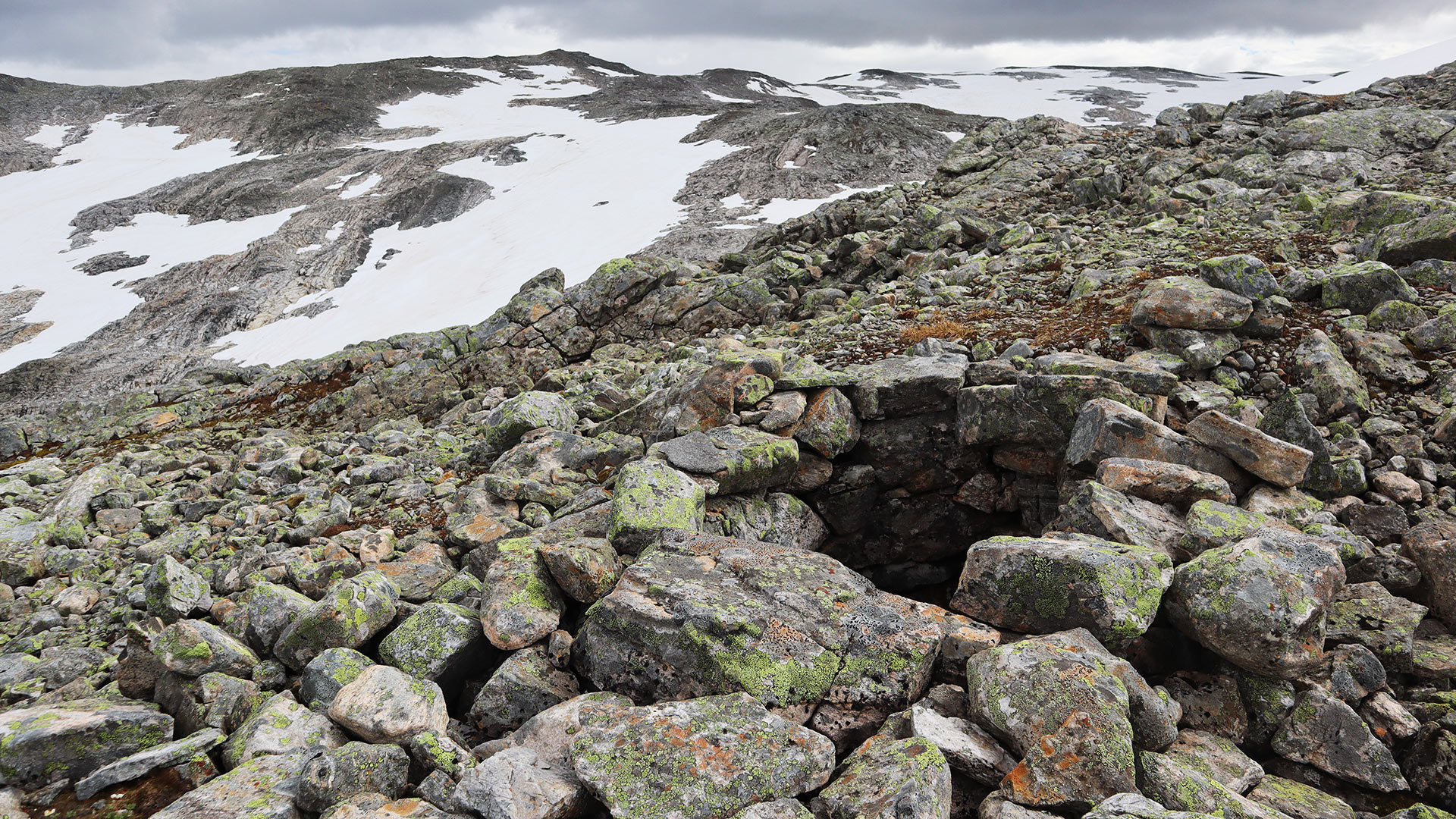 Pitfall traps and hunting hides in the high mountains show that wild reindeer have been important to the people around the fjord since the Stone Age. The most distinctive trapping area is found around Fresvikbreen glacier.

Here, large trapping sites can be found that include hunting hides, guiding fences and precipices on four ridges, from Tuftafjellet in the north to Handadalseggi in the south. Currently, there are three wild reindeer areas in the Nærøyfjord area; Fjellheimen in the west, Nordfjella in the east and Raudafjell on the peninsula between Nærøyfjorden and Aurlandsfjorden.

Caves and rocky overhangs have been found in several places close to the trapping sites, but there are no signs of permanent settlements. As the glaciers melt and retreat, many cultural monuments are revealed that are associated with hunting and trapping in the mountains. If you are out hiking and find any objects that could be cultural monuments, you must not touch them. Instead, you should notify the county authority’s archaeologist. When cultural monuments are moved, they can be easily damaged and cultural history will be lost.